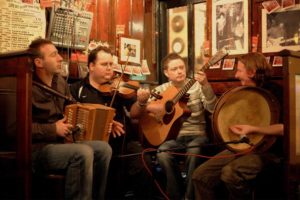 For better or worse, Irish Folk Music (also known as Trad) is well known today throughout the world. It is a prolific oral tradition which has captured the attention (and the hearts) of listeners everywhere.

While we can't say for sure when exactly it became an international phenomenon, the general consensus is that worldwide recognition of Trad Music was gained in the past 2-3 decades. Irish Folk Bands started to pop up in more and more places, raising awareness about the culture and history of our country.

War songs, anti war songs, love ballads, songs about voyages, about life and unfair death, about bravery and manhood, about loss and cheerful drunken celebration... there are Irish songs about them all.